“VENTRILOQUISM MADE EASY” by Stadelman and Fife.
This fantastic book features many AXTELL puppets and routines and encompasses
the modern era of ventriloquism! A classic book and with these updates – a treasure! $12.95 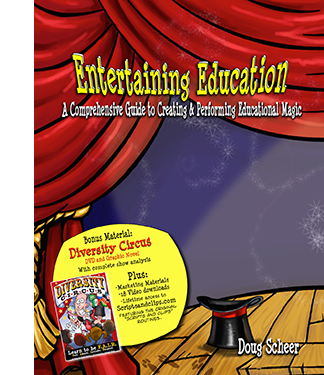 Here’s what you get:

-Passcode for lifetime access to Scriptsandclips.com with downloadable videos of all the routines performed live.

-Downloadable Director’s Cut of Diversity Circus with behind the scenes analysis of every aspect of the show.

-A dozen brochures/postcards/flyers that Doug has used to successfully market his shows to elementary schools for over 25 years.

Educational Magic is one of the most lucrative fields in magic. From school assembly shows to trade show floors, Doug Scheer has worked in every aspect of performing Educational Magic for over three decades. Entertaining Education, The Comprehensive Guide to Creating & Performing Educational Magic reveals Doug’s secrets to creating effective scripts, routines, and stories that will take your performances over the top. Included are downloadable videos of sixteen routines complete with the scripts that Doug uses to make an executive’s income by performing in schools.You get all the tools you need to start creating your own routines. Plus, you’ll discover why magic can be a distracting visual aid if not used properly, the two different classifications of magic effects, and how and when to deliver a message successfully.  The six elements of drama are discussed and analyzed so you can immediately get to work on improving your show even if you’re brand new to magic.  Groundbreaking ideas are presented complete with examples from Doug Scheer’s eighteen year career as an Educational Magician for one of the largest companies in America.  As a special bonus, a complete DVD and graphic novel of Doug’s highly praised school show, Diversity Circus, is included along with an extensive behind the scenes analysis of every aspect of the show.“Doug Scheer’s book Entertaining Education is a phenomenal resource. Truly one of the SMARTEST and innovative guys in school shows. Doug’s link to educational concepts, theatrical performance and audience interaction is what’s missing in much of what is offered in the market.” STEVE PETRAThis package (2 Books, DVD & More) is a must-have for anyone looking to enter the lucrative field of Educational Magic.  $65 plus Shipping 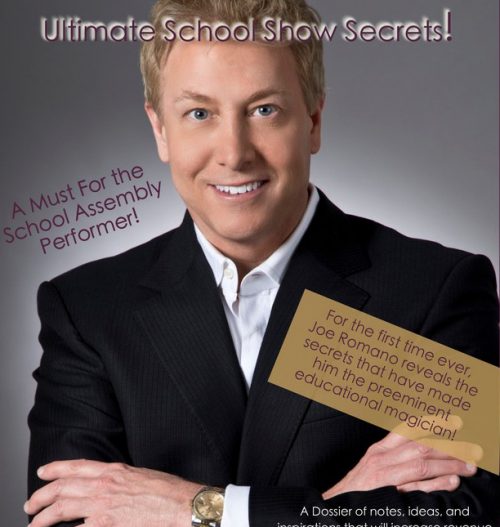 ULTIMATE SCHOOL SHOW SECRETS!Preeminent school assembly magician Joe Romano shares his 3 keys to success in the lucrative world of educational school assemblies. Romano believes in great Content, Exceptional  “Image,and showing  Appreciation. Welcome to the C.I.A!  Over 110 pages that include school assembly construction, marketing, how to create raving fans, merchandising, and more! Contributions by school assembly experts Ken Scott and Doug Scheer. Top drawer Information!All this PACKED info for $110 plus shipping!
“Not a joke, this book changed my life. I bought it from Joe at the first Kidabra I attended in 2013. After reading this book, investing in material for a professional show, and marketing myself (which is discussed in the book) I was able to leave my extremely stressful job as a funeral director and follow my dream. I have entertained all my life, but always part time; it was this book, the love and support from my wife, the prayers in my faith that I finally broke free of working for someone and working for myself. It is worth 100 times it’s selling price, if not more.” Clark Sides 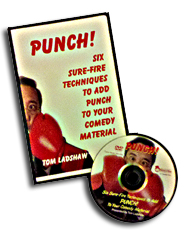 This Book & DVD teaches you 6 specific techniques that will help you take your routine from “chucklesville” to “guffawtown.”Let’s face it, one of the hardest things about putting together a routine is making it truly funny. You end up settling for “cute” bits to fill out your routine, but don’t really get “rolling in the aisles” laughter from your audiences.
In PUNCH!, Tom has concisely explained these 6 techniques, the theory behind why they work and actual examples.
These are the same methods today’s top comedy pros use to make their acts funny.
If you want to create original material, or add more zing to your existing material, Tom’s new book will enable you to quickly and easily add PUNCH to your comedy.

Mark Wade’s Kid Show Ventriloquism – $5.00 while supplies last! Only $5 plus shipping for a classic book- This great book brings together the best of all kid show entertainment knowledge, and focuses on your vent act. 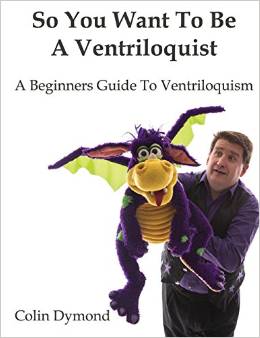 So You Want to Be A Ventriloquist by Colin DymondSo you want to be a ventriloquist is a complete guide for beginning ventriloquism. Including puppet manipulation, how to talk without moving your lips and how to write a comedy script. Lot’s of Axtell puppets & ideas packed into this book! $25

JOKESTORMING – $6.00 STEVE AXTELL shares his own method of joke writing. Includes a complete DUCK routine and a manuscript on how it was created from scratch! One of the hardest things to do is to generate a lot of joke ideas on a given subject fast! This will show you how – step by step! A mix of brainstorming and joke writing = JOKESTORMING!