This unique third arm gimmick creates the illusion that you are holding one of our bird puppets on your outstretched arm like a bird trainer – and the BIRD PUPPET appears to be alive – totally animated! Thousands of you already use this illusion, and know the POWER and IMPACT it gives your performance!

Hint: Choose your dominant or strongest arm unless you need it free for shaking hands or writing on a blackboard while your bird is on the other hand. ORDER HERE

Kevin Johnson using our Bird Arm and Cockatoo
on America’s Got Talent!

Behind the Scenes with Steve Axtell & The Bird Arm Illusion

“Thought you like to check out the get up I put together with your crow. Here I am dressed as a scarecrow with “Vel” as in “VelCrow”. Vel has been telling all that I am truly “outstanding in my field”. Also is informing everyone that my field is corn and that I am full of it, this has confirmed by the Kernel himself. Vel is very glad that he is a crow especially around Thanksgiving because most people do not like to eat crow.” – Ed Casey

Tips to Using Your Bird Arm

When using your bird arm it’s important that it looks and behaves like a real arm that your bird is sitting on. Here are some tips….Avoid making super quick movements which will cause the arm to bounce.

Always make sure the bendable arm is shaped well before presenting it to the audience. Look it over good before bringing it out of a case or from behind the curtain. The most natural open hand position seems to be the index finger extended straight out and the other fingers fanning downward more relaxed. It has to do with the way the arm supports something sitting on it (like a bird) the tendon of the index finger is usually stiff. If you bend the glove into a fist (to hold a leash etc) make sure you take the time to create bends where real knuckles should be. Put the other glove on your other hand and study it’s shape in the glove, match it and then show it to someone else for comments.

The arm should never be tilted down toward the floor as it makes your elbow look broken. Often this happens when you tilt the bird out away from you. To help you with this, bend the brass tubing angle the arm upwards a bit. Then you can perform the illusion and the arm will not go down in a bent backwards position.

Remember to set the length of the arm to match your other real arm. Once you have the length set crimp the brass tubing onto the wire so it is locked. Even thought it’s in the instructions, some performers skip this step and are working with a loose set up.

When we started out building the Bird Arm Illusion over 20 years ago we made it with a shorter glove. This meant that the hole your arm came up thru into the puppet needed to be cut into a shirt or jacket sleeve. Around 10 years ago we started making a longer gauntlet on the glove and the hole is now in the glove. If you have one of the older shorter Bird Arm Illusions you may want to switch to the new version. You do not need to wear a jacket, or long sleeve shirt with the illusion now, as your arm comes up thru the hole in the gauntlet.

If you have discovered more tips please feel free to email them to me. Thanks!

EASY ON – EASY OFF – Normally, to wear the illusion you put your arm into the Bird Arm support, wrap the velcro around your arm and then slip the bird puppet onto your arm and adjust. It takes about 20-30 seconds.
But take a look at this! In order to slip into BOTH the Bird and the Arm in about 2 seconds,mount it all to a can first! 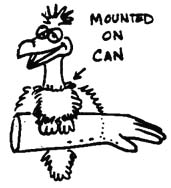 Make the Arm and Puppet very easy to slip into by setting it up in the following manner: Mount the Bird Arm to a coffee can (with both ends cut out) or similar rigid tube. After the Velcro has been attached around the can, put the bird puppet on over the can and the Bird Arm strap. Your bird is now one unit with the can and arm. You can slip into the can quite quickly this way.

I have one of AXTELL’s “Vern” birds, with the “arm device”… Something I can always count on to be a “WOWser” is “Vern”… right out of the box, when folks first see the effect, it’s one of those wonderous moments that we all yearn for. You can just feel the excitement as the audience wonders “How does he DO that? The bird seems ALIVE!”

Well, here’s something I’ve found to be very effective in BUILDING the anticipation before “Vern” first makes his appearance, and I’ve found It ALWAYS gets laughs, especially from kids. What I do is play appropriate, funny music while I’m putting ON the device; I use the “can” concept Steve has come up with, which just takes a few seconds to put on, but when I’m using the music, I milk it for a couple of minutes; I have the lid to my figure case up, so the audience can’t see what I’m doing; I have a little battery fan in there too (you can get them at most Drug Stores during the summer for about $5), and some some loose bright colored feathers (available at most craft stores for a couple of dollars a bagful)… timed with the music, I’ll put a few feathers in front of the fan, and it blows them up in the air…. I look surprised, like “what’s happening” etc.). My favorite music for this is the 60’s “Surfin’ Bird” by The Trashmen (which is funnier than the original “The Bird is the Word” by The Rivingtons).

Other times, I’ll be out of sight (behind stage, behind a door, etc.), start “Surfin’ Bird” music, and then run around amongst the audience while the music plays… this is especially effective if this will be the first time the particular audience will have seen one of the “birds”….

Thanks Steve! Just like your Drawing Board, I recommend “Vern” (or any of your “birds”) as a MUST HAVE for every Vent. Ed Dotson, Pensacola, Florida

“I fell in love with the arm within a minute of trying it ,the movement is very natural and random, it’s very much worth the investment.” Dave Hereid


“I received the Bird Arm Illusion today and fell in love with it. It is going to be a pleasure working with this. Thank You very much for a great job!”
Mike Weyermiller
Kids Korner Krusaders
Tulsa, OK

Here I’m using the Bird Arm Illusion with our Toucan Puppet but half way through the show I switch him to the Animatronic Toucan and use a Magic Drawing Board at the same time.