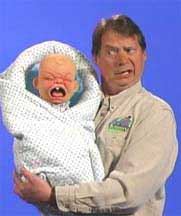 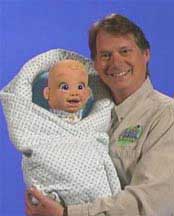 The Cry Baby Puppet can be yours for only $289.95 plus shipping. It’s a shocking effect and gets tons of laughs!!! Includes the comfortable latex head, fabric tube pajamas and the big baby quilt shown in the photo. The baby is attached to the 28″ blanket, it’s all self-contained & easy to use!

What our customers have to say

"I just purchased the Axtell Cry Baby... and it is nothing shy of awesome. The reactions I get from both kids and adults is mind blowing. With my babycry routine, the puppet is flawless perfection. It's a duo that can't be stopped. Destined to rock the face of vent! Thanks to Ax for another homerun from the land of latex. You are the king!"
Jimmy Vee
If anyone is thinking of purchasing the Axtell Cry Baby, do not hesitate. I've used mine the last few months to wonderful responses, but today was the absolute best. I did a show for about 200 people - 75 children and their parents. The baby was a hit and the laughter was just nonstop. After the show I went to a local restaurant for lunch before my next performance and the couple next to me mentioned they were at the show and enjoyed it very much. They said they felt like kids again. The husband said he never laughed so hard as when I brought out the baby and he wanted to know how the baby changed it's expression so quickly. Then he said, "That baby had three different expressions and they changed at lightning speed!" For those of who own the Axtell baby you know there are only two expressions, not three. I was chuckling inside as he kept mentioning the three different expressions. He was fascinated by this. Finally I said it was just "magic". Steve, you have created another wonderful character. Thanks so much!
Linda Holliday